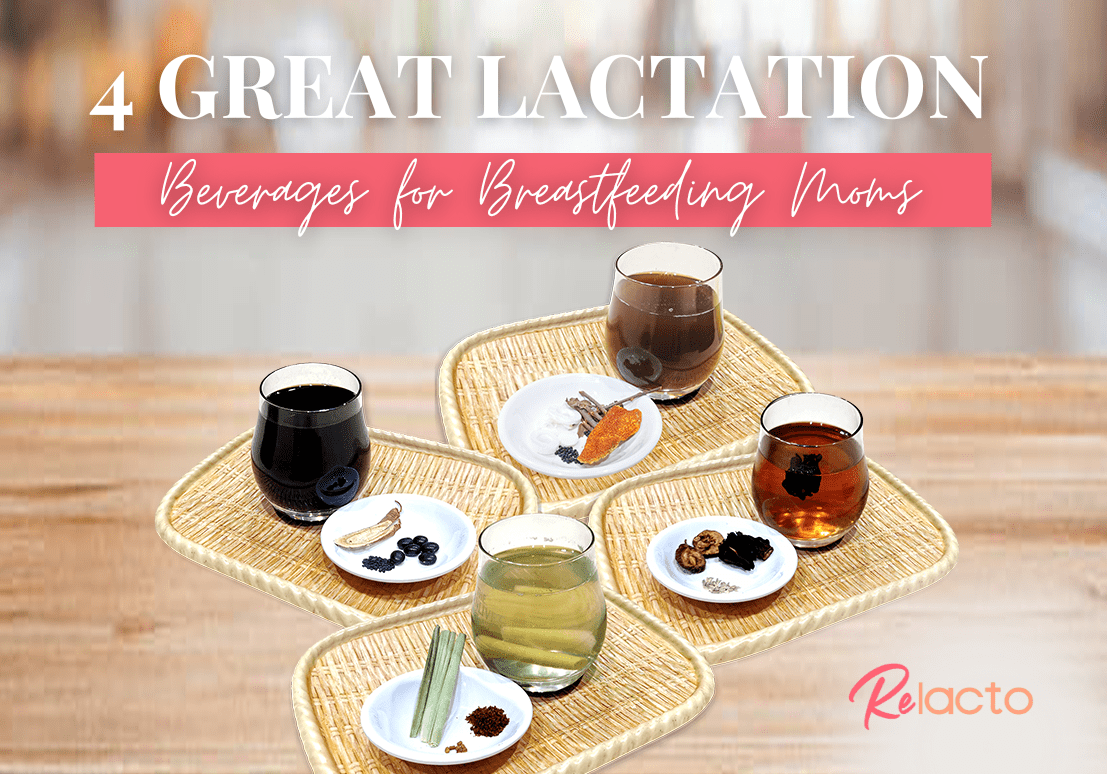 Hey, you there. You who are reading this right now. Do you hear that? Sounds like a baby crying.

Now, how many of you reading that actually looked away from your laptop, phone, tab, computer, anything that you’re using to read this article on to look up and check if there actually was a baby crying in the background?

This next bit is where it gets a tad more interesting (for us, anyway), how many of you started lactating?

Yeah, yeah, it’s not a real baby crying, we know. There have been studies that show women who breastfeed are tuned in to their baby’s cries and internally, the body gets production up and running in anticipation of the impending need to feed the baby.

Throughout history, there’s been records of breastfeeding. In the ancient era, there have been paintings and other records that record even their deities depicted with their breasts exposed and a small baby of some description suckling from them.

From Mesopotamia, Ancient Egypt, and Ancient Greece, to the Romans, Bayzantineans, Chinese, Indies, to the middle and dark ages of Europe, all the way to today. There have been references to and records of breastfeeding.

It has been a science and an industry all in itself, breastfeeding. The hiring of wet nurses, the advent of the infant formula, the discovery and usage of lactogenic ingredients to boost breastmilk production, it wouldn’t be too much of a stretch for us to now say that civilisations have been propped up on the act of breastfeeding.

Yes, you read that right. Wet nurses were a whole thing in the past and who knew that people were that much more open to letting a designated lactating mother feed the entire neighbourhood or village? Well, in all fairness, they didn’t have things like COVID to worry about back then. To this date, there are non profit organisations that provide a platform for mothers to donate their breast milk for other mothers who may not be able to breastfeed their babies.

Yet, for a bygone era to discover the powers of the galactagogue or lactogenic ingredients, that is quite the achievement indeed.

Well, what are they? Simply put, lactogenic ingredients are…well…ingredients. They’re put into cooking recipes or even beverages to help lactating mothers along by ‘boosting’ their production or supply. Some examples include the following: 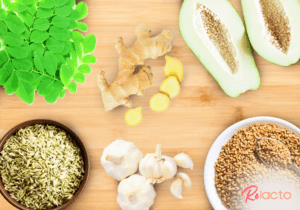 A pretty yellow flowery herb-y thing whose dried seeds are incorporated into food and medicinal uses. While once being native to the Mediterranean, it now proliferates all across the globe. Medically, it might help in relaxing certain parts of the body and it contains a compound called anethole which binds to prolactin which normally gets bound by Dopamine, but since anethole is similar to dopamine, prolactin that binds to anethole which is found in Fennel, it is believed that it may potentially be able to stimulate milk production If one were to cook with it, it’s got an anise-esque flavour about it.

Another herb-y thing that’s similar to clover and tastes similar to maple syrup; be that as it may, we still won’t recommend that you pour this stuff over your weekend breakfast pancakes. Once indigenous to the Mediterranean, Europe, and Asia, you can now find it in most grocery shops near you.The theory as to how fenugreek may help to support in breast milk production is by stimulating sweat production, and because breasts are somewhat a modified sweat gland, fenugreek may stimulate them to produce more milk. Fenugreek also stimulates insulin and oxytocin secretion, which is a possible mechanism. The hormones insulin and oxytocin stimulate breast milk production.

You might think this one sounds like something you’d find out of an Indian recipe book and, guess what, you might just be right there as this plant is native to the exotic subcontinent of India (as well as some other countries, of course, but mainly India). An antioxidant, anti-inflammatory, antihistamine, and also a rather tasty painkiller all in one go.

We know this tropical fruit, it’s juicy, it’s delish, and its leaves are rumoured to help with dengue fever. It is said that green papaya is one of the best galactagogues around and contains an agent that may help mothers make more breast milk. On top of that, it also contains essential vitamins like A and C,

Good on toast, good on cheese baked rice, good coupled with butter and based on a nice steak. Truthfully, it adds that extra punch to any good meal. For today’s topic, garlic is also a galactagogue that’s famed across cultures. It’s said that garlic can change the taste and odour of breastmilk which gives it that extra oomph. Now, if your baby turns their head at the taste and odour of garlic-y milk, then maybe hold off it for a bit.

This one is a spicy native to Asia. Speaking of Asia, traditional medicine says that ginger is also a lactogenic compound. What we read so far says that it may help improve breast milk supply as ginger stimulates vasodilation, bringing more blood supply in this case when at the breast where it may potentially stimulate more breast milk..

The Roselle Flower, Black Dates, and Fennel Seed are the major components in this. This Roselle drink would have a citrus-y, slightly sweet taste to it on its own. Black dates used tonifies blood and is less warming than the regular red dates. Fennel used here is for it’s potential to support breastfeeding.

Well, we’ve covered Fenugreek above, let’s take a look at Lemongrass. Lemongrass contains antioxidants and more cooling in nature. All of this neatly packed up within a hydrating and refreshing drink.

Two new ingredients to think about here. Black beans are a source of folate which is essential during breastfeeding since folate requirements remain high during lactation. Black Sesame Seeds, on the other hand, are quite popular here in Asia. According to Traditional Chinese Medicine, black sesame seeds help to nourish and fortify the liver and kidney yin, subsequently improving breast milk supply.

Next in line, we’ll look through the lens of Traditional Chinese Medicine (TCM), we have a drink that contains Tong Cao herb and Sang Ji Sheng. Sang Ji Sheng is another name for Mulberry Mistletoe. It is elementally neutral. Surprisingly, it is thought to help soothe the womb and stimulate breastfeeding. Tong Cao is also known as the Medulla Tetrapanacis, Tetrapanax, or the Rice Paper Plant Pith. This plant has a somewhat cooling effect on the body. It is also thought to aid with lactation. 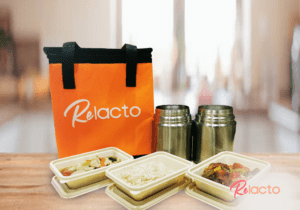 If you are interested in having any of these lactation beverages for yourself, there’s actually a very convenient way in which you can enjoy them.

We’ll let you in on a secret. These drinks can be found in our ReLacto meals. Of course, our lactation drinks are concocted with inspiration from the traditional recipes, but with two additional bonus points – 1. We make them using our own unique recipes, and 2. We have additional ingredients guided and recommended by our professional in-house dietitian to ensure that you are getting all the nutrients as well as the best support you can get from only the best lactation meals!

Let’s say that you are worried about being served the same drinks and will get bored of them, well, don’t worry. We will serve different lactation beverages daily and with a wide range of over 100 dishes from fusion as well as Chinese cuisines, the only thing you have to be worried about is which to eat first!

All this talk about food and lactation drinks got you interested in a specific meal plan for lactating? You can stop looking online for “lactation food near me” already, because we have everything you need right here. Drop by our website to view our menu and book your packages today! 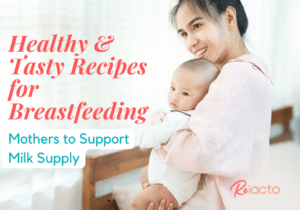 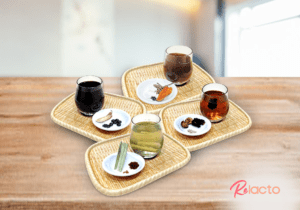 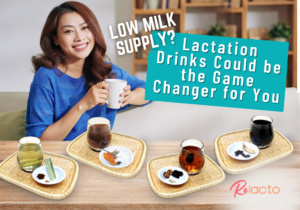 Low Milk Supply? Lactation Drinks Could be the Game Changer for You 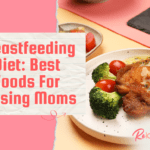 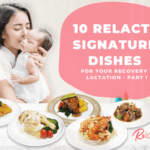 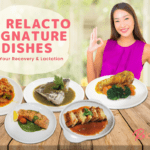 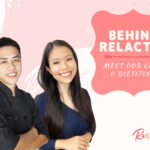 Behind ReLacto: Meet Our Chef & Dietitian!